Acknowledgment in the NGO webfor being a co-financier.

We send you a grateful postcard signed by some of the Goundi participants in the project + Acknowledgment in the NGO web for being a co-financier.

Written by the president of the NGO, Isabel Rodríguez Vila, it explains the vital experience she had in her first travel to Goundi as a hospital cooperator + Acknowledgment in the NGO web for being a co-financier.

Written by the president of the NGO, Isabel Rodríguez Vila, it reflects her experiences in seven trips in which her desire to help to the development of Goundi was built + Acknowledgment in the NGO web for being a co-financier.

Entrance ticket for the XI concert for Chad (March 2014)

Every March it is celebrated in the "Auditori de Barcelona" a solidarity concert for Goundi. With different types of music and dance, a show is offered with the scope to amuse, thrill and cooperate with the different projects of the NGO in Goundi + Acknowledgment in the NGO web for being a co-financier.

We send you both books: "Goundi, unas vacaciones diferentes" y "Descubriendo el Corazón de la Tierra" + Acknowledgment in the NGO web for being a co-financier.

Entrance ticket for the solidarity concert for Goundi + both books: "Goundi, unas vacaciones diferentes" y "Descubriendo el Corazón de la Tierra" + Acknowledgment in the NGO web for being a co-financier.

Demonstrative workshop of the system when it is operative + Entrance ticket for the solidary concert for Goundi + both books: "Goundi, unas vacaciones diferentes" y "Descubriendo el Corazón de la Tierra" + Acknowledgment in the NGO web for being a co-financier.

Institutional acknowledgment as a main sponsor of the NGO and the project in all those activities which MyDpG does, such as the annual solidary concert in the "Auditori de Barcelona" + All the other rewards(books, concert ticket, demonstrative workshop) + Outstanding acknowledgment in the web.

The aim of this project is to build a gasification system which uses agricultural residual biomass to generate electricity in Goundi, a village from The Republic of Chad.

Two years ago, the "Centre de Transferència Tecnològica CITCEA-UPC de la Universitat Politècnica de Catalunya · BarcelonaTech" and the NGO Misión y Desarrollo para Goundi collaborate in order to support the development in Goundi. The scope of this collaboration is the electricity generation to feed the hospital, built 20 years ago, to avoid the diesel dependency and its related economic waste. To promote local economy and avoid this money transfer to the petroleum companies, a project has been devised to generate electricity trough the gasification of the corn cobs, the agricultural residual biomass they produce over there.

The first phase of the project is being achieved, as far as we have already bought a gasifier to a small open source company in California, USA, called All Power Labs. By the moment, we are testing its performance in Cabrils, Catalunya, to get sure it works properly and to be able to send with absolute confidence that it is going to work there too. Manuals and formation courses for the Goundi people will be written. Once all the trials have been done in Cabrils, the gasifier will be sent to Goundi as a pilot test to show its multiple applications: feed the water pump, the hospital, small workshops… and to do the formation courses about its control.

The second phase of the project will be to build our own gasifier, with the aim to produce it with simple materials which are easy to obtain, even in Goundi. It is important to do this in order to write a building manual, therefore, the Goundi inhabitants will be able to build their own gasifiers without needing external support, searching for a big level of self-sufficiency and independence from the petroleum, but also from the NGO. 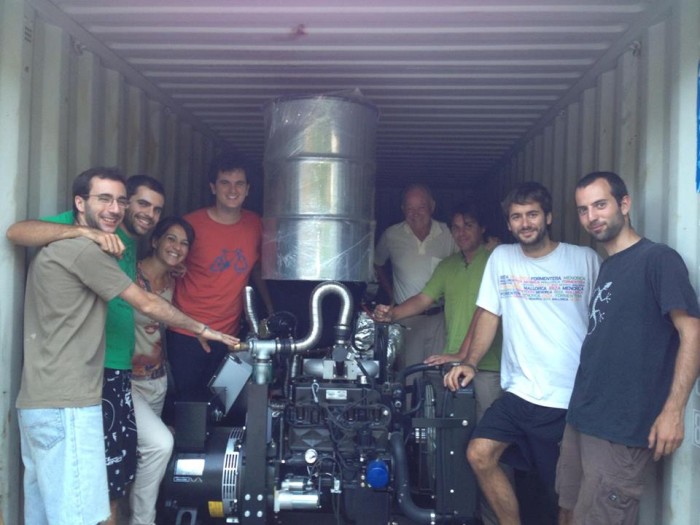 The main objective of the project is to build a brand new gasifier, with materials which are easy to find in Goundi and a more adapted technology to the needs and conditions of The Republic of Chad, in order to be able to self-reproduce the gasifiers over there without the constant NGO support.

The gasification is a way to use the inner energy of the biomass. It is much easier to control than combustion, giving us the chance to generate electricity trough a simple car engine and a coupled electrical generator. The process followed is to warm the biomass to a temperature in which it is decomposed, generating synthesis gas, which is a mixture between hydrogen and carbon monoxide. The produced gas is burnt inside the engine and its movement actuates on the generator, which finally produces the desired electricity.

An agricultural formation system has also been created in order that Goundi people can obtain more food by cultivating the same land extension. By this way, to the technological and economic development we add the increase of food production, a very important factor in a region where starving is always present. The corn produced in the conceded lands to the NGO by the Goundi government is going to be fully given to the Physically Disabled Association of Goundi, whose members are the workers who are preparing the terrain and the silos for the corn and the corn cobs.

Every year, the NGO “Misión y Desarrollo para Goundi” has to obtain tens of thousands of euros of financing in order to be able to feed with diesel the hospital. The hospital has around 200 beds and some operating rooms. Some doctors are volunteers that come from Spain, but there are others that are from Goundi, and they studied and learned how to do it trough the NGO. Obtaining this financing is very difficult, and every year it becomes harder because of the global economic situation. This is the main reason why the project was developed, to avoid all this money to go out from Goundi instead of staying there. 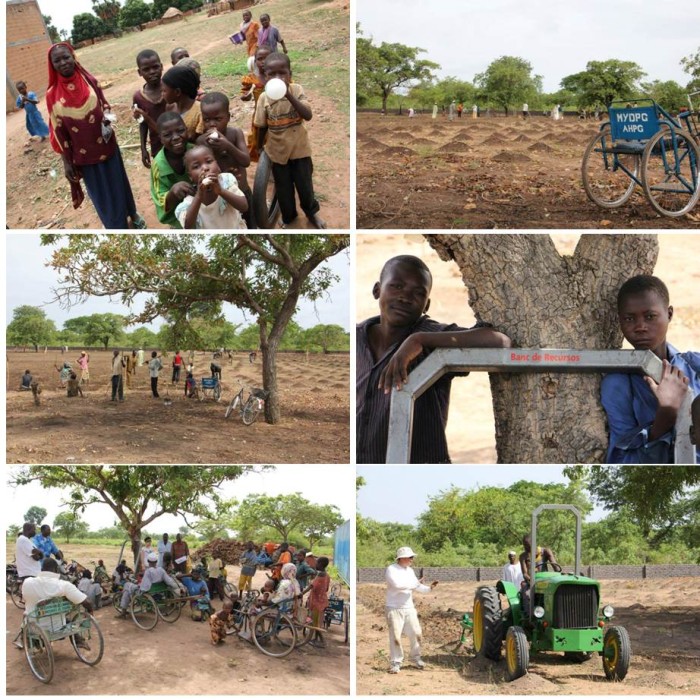 The project team is formed by people from the NGO, who contribute with the experience and the knowledge about Goundi because of their 20 years of going there to help the hospital as volunteers. The other part of the team comes from the "Centre de Transferència Tecnològica CITCEA-UPC de la Universitat Politècnica de Catalunya · BarcelonaTech", who contribute with the technological part of the project and the knowledge to use and develop new devices.

The project is going to be developed in Barcelona, the theoretical and technology development part, Cabrils, the building of the new gasifier, and also Goundi, which is the final objective of everything.

The previous experience is the one derivate from the project itself, the study of the viability of gasification in The Republic of Chad, the acquirement of the gasifier and its set up to work. The experience also comes from similar technological projects developed by the "Centre de Transferència Tecnològica CITCEA-UPC de la Universitat Politècnica de Catalunya · BarcelonaTech". This project has obtained some grants, such as the one from the "Centre de Cooperació per al Desenvolupament de la UPC", which, in the last two years, has given 7500€ in order to promote and develope this project trough granted students.