Acknowledgment at the blog, exhibit and book

Acknowledgment of your collaboration at the blog, photography exhibit and book (printed and ebook)

Acknowledgment of your collaboration at the blog, photography exhibit and book (printed and ebook) plus a printed photography size 13x17

Acknowledgment of your collaboration at the blog, photography exhibit and book (printed and ebook) plus three printed photography size 13x17

Printed book + all of the above

Printed book, cknowledgment of your collaboration at the blog, photography exhibit and book (printed and ebook) plus three printed photography size 13x17

2 printed books + all of the above

2 units of printed book, acknowledgment of your collaboration at the blog, photography exhibit and book (printed and ebook) plus three printed photography size 13x17

Skype chat + all of the above

Printed book, acknowledgment of your collaboration at the blog, photography exhibit and book (printed and ebook) plus three printed photography size 13x17, plus a conversation on skype with the author

Article or report presentation for media/newsletter

Spacial acknowledgment at the blog, exhibition and book (electronic and printed)

A project on the other earthquakes that keep impoverishing Haiti. Since independence, 210 years ago, Haiti has been the object of continuous plundering, occupation and exploitation. This process has continued after the 2010 earthquake.

January 12, 2010, Haiti suffered an earthquake that left about 300,000 dead (between 200,000 and 316,000 according to various estimates) and 1.3 million homeless. Media around the world mobilised to cover "the tragedy of Haiti" during the days after the earthquake. Millions of euros were raised by NGOs around the world joining the governments and aid agencies promises. Emergency aid protocols and strategies were deployed around Haiti and hundreds of emergency projects first, and reconstruction projects later, were launched. Some say that more than 10.000 NGOs were working in Haiti, along with aid agencies and humanitarian aid teams (including army) from many countries and international organizations, from the United Nations to the World Bank.

Nearly four years after one of the most serious tragedies suffered by the poorest country in Latin America and the Caribbean, when asking what happened in Haiti, few tracks (if any) are found in the media. The few we find talk about natural disasters, political and social instability, and the difficulties and delays in the reconstruction process. But few efforts are made to unravel the complexities of Haitian reality.

Why none of the 50 earthquakes of about 7 degrees on the Richter scale occurring annually cause the level of destruction that occurred in Haiti?

Why does it seem "so difficult" the reconstruction in Haiti ?
What role is playing the Haitian government?
Why are there so many protests and political instability?
What are doing the many NGOs in the country? Is it true that Haiti is known as "the NGO republic”? Why?
What is the proposal of international organizations like the United Nations or the World Bank for Haiti?
Are the textile industry, mining, agribusiness for export or luxury tourism going to bring “development” to Haiti?
What foreign companies are investing in Haiti?
What do Monsanto and other agribusiness do in Haiti?
What are the IMF recommendations for Haiti?
Were are the more than 6 billion euros pledged after the earthquake? Have they been disbursed? How have them been allocated?
What do the UN peacekeepers - MINUSTAH - in Haiti?

And finally what does Haitian civil society think about it all?

When we look up for information about countries such as Haiti in the media, we normally find simplistic analysis. With few exceptions, it is not easy to find works, studies, …? that address the complexities, obstacles and interferences in the development processes, international cooperation and reconstruction. We can easily find complacent readings of how good is development aid doing in terms of results, despite all the difficulties (not analysing what are the root causes of those difficulties). They show us the local and indigenous people just as victims of unexplained adversity or as grateful recipients of aid, and not as active political subjects, protagonists of their own present and future. Those are the visions that ignore economic and geopolitical interests of institutional and private companies in the country.

The case of Haiti is especially relevant if we want to look at those interferences, as this small Caribbean country has suffered over the years many political, financial and commercial intrusions. Intrusions that have shaken the country so profoundly that it is almost impossible to think of a reconstruction without overcoming these interferences.

This project intends not only to explain what’s going on in Haiti, once the cameras and microphones left the country, but also to try providing a critical view of the complexities and obstacles encountered by the humanitarian, reconstruction and development cooperation processes.

Through a blog, newspaper/internet media articles, a book and a photographic display, I hope I can enlighten the “whys” behind the complex reality of Haiti, nearly 4 years (1460 days) after the earthquake that brought Haiti at the centre of the aid map, and almost 210 years after the uprising of thousands of slaves that made Haiti become the first free country in Latin America and the Caribbean. 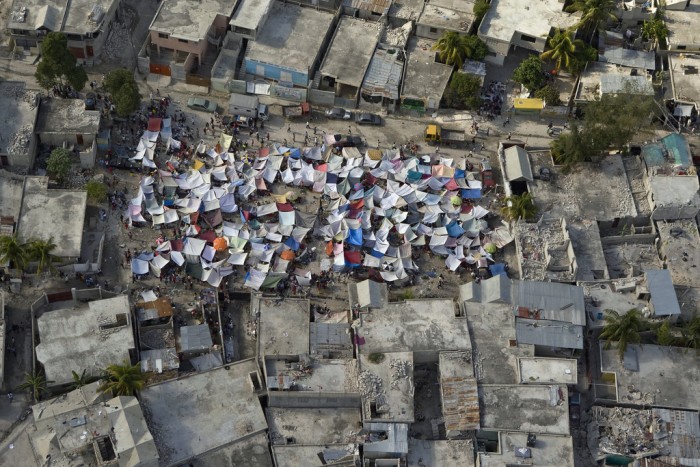 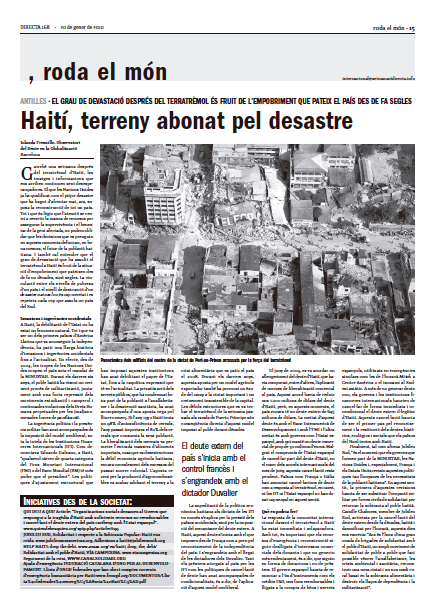 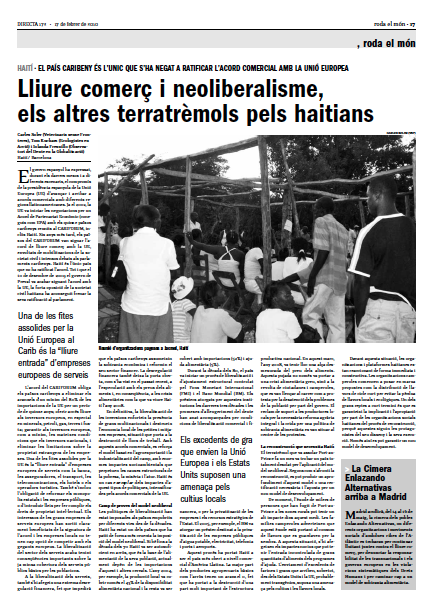 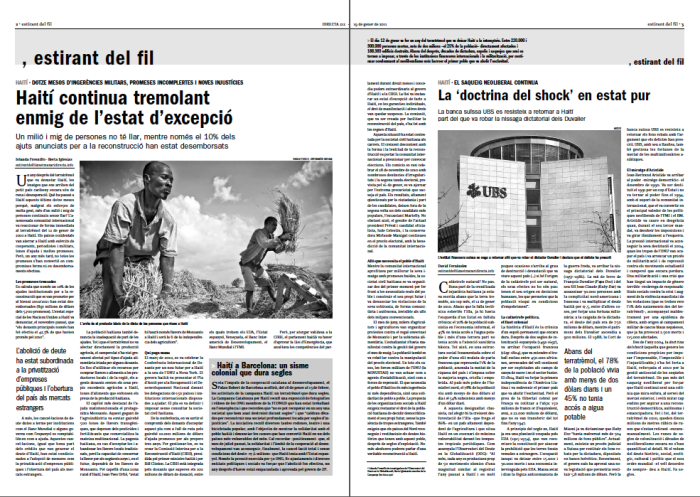 This project really began in 2010, when following the earthquake, and together with other campaigners from the “Who Owes Whom?” network (www.quiendebeaquien.org ) and other NGOs, we asked ourselves why such devastation. At that time, and over a year, we researched and published articles and a dossier on interference in the development and reconstruction in Haiti. Nearly 4 years after the earthquake, I thought it would be a good moment to look back to Haiti and review what has changed, and what remains the same.

During the stay in Haiti I will publish a weekly post on the blog (www.haitiotrosterremotos.info) created for the occasion (most posts will be in Spanish and Catalan at first, but I hope to have support for translations into English and French). Also during my stay in Haiti and specially in January 2014, when it will be the 4th anniversary of the earthquake, I’ll try to publish articles in various media, mostly internet Spanish media. The objective is to give more visibility to the Haitian reality, with special attention to the obstacles of development and reconstruction processes.

On January 12, matching the 4th anniversary of the earthquake, I hope to open a photo exhibition on Haiti (in Barcelona), which will be also available in the blog. Those who collaborate on the project may choose to receive impressions of some of the pictures from the exhibition.

Although I am not a professional photographer (and I'm far from being one) , I hope to capture and share what I see and experience during the six weeks I spend in Haiti. Here's a sample of my photographs so far: http://iolandafresnillofoto.wordpress.com - http://www.flickr.com/photos/frostis

At the same time as the exhibition, I will make at least a first public presentation of the project in order to share research findings, impressions of the trip, and the proposals that I might bring from Haiti. The presentation will be held in Barcelona and shall be broadcasted by streaming through the blog, open to anyone who wants to participate.

The project will be completed with a book. A compilation of stories that may help us understand the complexity of a country such as Haiti. A book that, through those personal stories, help us understand the interferences that corporations, institutions, investors and even NGOs, pose to the development and reconstruction process. A book that also tells about Haitian civil society, its strength and tenacity in fighting for its own future.

The book will be available under Creative Commons license and free download on its electronic version, and in case we have enough resources, will be edited and printed for distribution to the people who collaborate in the project and all those who want to enjoy it.

Both articles and the book will be published in electronic editions on the blog in Castilian and Catalan, and as far as contributions allow it, in English and French. 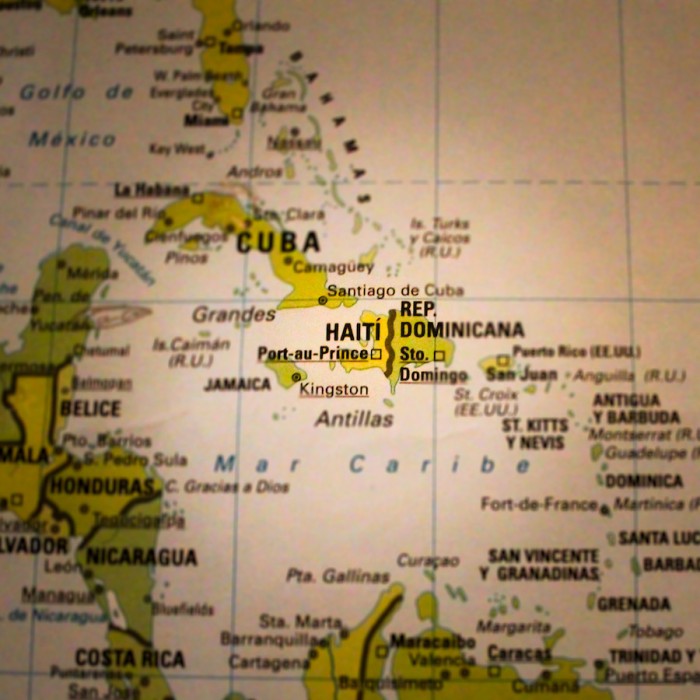 Due to my work at the ODG (www.odg.cat) and personal motivation, I spent some time trying to understand and explain why an earthquake like the one that struck Haiti on January 12, 2010 left almost 300,000 people dead and more than 3 million homeless, and yet none of the 50 earthquakes of similar magnitude that occur annually in the world according to the U.S. Geological Survey have such a devastating impact. It is not enough to say that impoverishment in Haiti is the cause. It is necessary to reel off the reasons for this impoverishment. The legacy of colonization, debt payments due to an independence gained by revolt, and years of unjust economic relations, military and political interferences, economic structural adjustment and dealing with illegitimate debts, are some of the answers I found. Are those answers still valid to explain why the reconstruction appears to be so complex in Haiti?

The project has its origins in the personal (and hopefully collective) need to answer this and other questions that arise when we look at Haiti, and ultimately to many other countries where, despite the massive presence of NGOs and international organizations, it seems impossible to get out of the impoverishment hole. This project aims to give visibility to those processes that not only mean an obstacle to development, but also impoverish even more.

This project is aimed at all those with an interest in understanding and visualize those answers. Also to those who want to approach reality in Haiti, from a rigorous and critical point of view, enabling them to delve into its intricacies. The project is also aimed at those people who believe that it is possible do much better when communicating on development processes. A communication that avoids disaster spectacle that characterized the media in covering the impacts of the earthquake. A communication that helps the transformation processes that may allow us building a more just and equitable world. 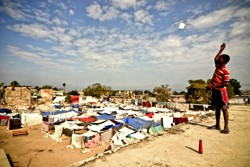 To show in a rigorous, open educational way how Haiti is today, almost 120 years after independence, almost 1460 days after the earthquake that devastated the country.

Through my writing and photographs, the aim is to try to refocus on Haiti, not to raise money or to show the results of a cooperation project, but to answer the questions that will help us understand what is going on in Haiti today. 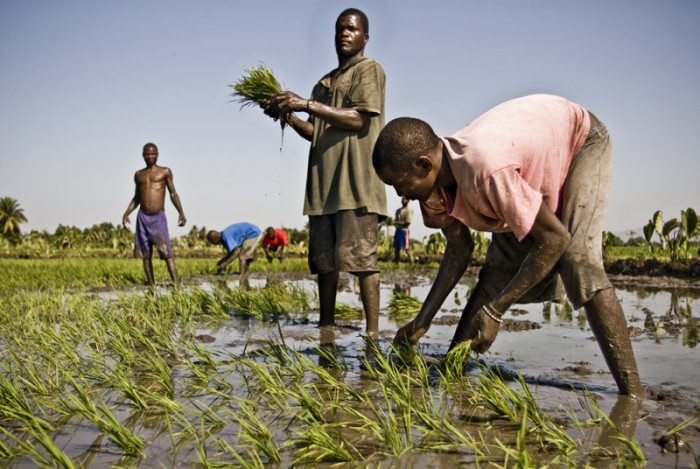 The project is born from an individual initiative, but it hopes to raise numerous collaborations.

Starting with the PADPA fellows (www.papda.org), and especially Camille Chalmers (http://goo.gl/E9J5Km), friend and militant who will guide me through Haitian Society. I will count on the support of fellow militants from Jubilee South (www.jubileosuramericas.org) and the Debt in Globalization Observatory (www.odg.cat) with whom I have worked before about Haiti and in many other issues.

Colleagues from Spanish organizations in Haiti such as Assembly of Cooperation for Peace - ACPP , IntermonOxfam, Veterinarians Without Borders and Pharmaceutical Mundi, have also offered specific cooperation, and the list is extending with each passing day.

Finally I have a group of people who support me from Barcelona for communication tasks, including Merche Negro (@pintiparada) who is helping me with audiovisual production and the construction of the blog (http://haitiotrosterremotos.info ) and Mar Valldeoriola , with whom I'm developing the communication plan .

The project will count especially with my dedication and enthusiasm, plus the experience of over a decade researching and communicating stories on interferences in development.

In the case of Haiti, here are some samples of my work: 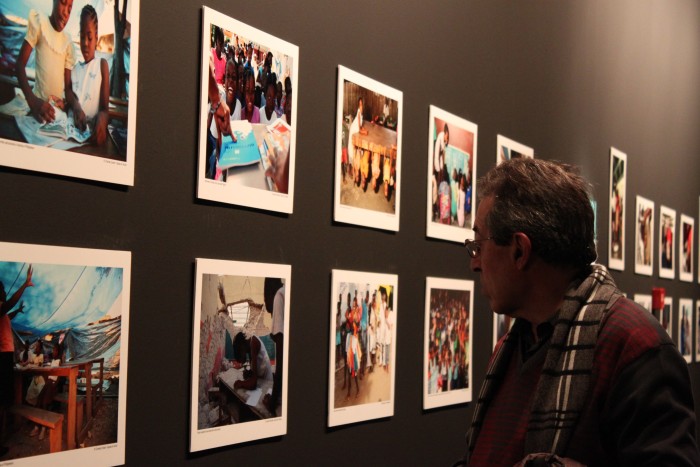