Do you want to make your own control interface?

And do you want to control all the software and hardware you use for your multimedia projects with it?

In addition.... Do you want it to have an attractive, flexible and open source design?

Stop beating around the bush! The thing you want is BHOREAL.

BHOREAL is an Open Source interface based on the Arduino platform that allows to control all types of software and hardware using a surface with RGB LED-backlit pushbuttons.

You can use it as OSC/MIDI device to trigger samples live, as sequencer, synthesizer, rhythmbox, pitch map generator or remote control. It can also work in standalone mode as algorithmic and generative driver, mathematical simulator, game interface, low resolution LED display or any other kind of application you can imagine.

Thanks to its versatility, BHOREAL is a fundamental tool for DJs, VJs, musicians, artists, hackers and all kinds of creative DIY people willing to explore a piece of hardware which is infinitely reconfigurable and reprogrammable.

The BHOREAL controller allows to overcome the constraints imposed by conventional device manufacturers. Its Open Source essence makes it possible to modify and adapt the tool freely.

For the last few years, MID´s team has been working on this interface in order to maximize its flexibility and provide adaptable configurations for each user needs. On the basis of these premises BHOREAL is available in four different models: two DIY self-assembly kits and two “ready-to-use” preassembled units .

Both hardware and firmware are completely Open Source and are released under Creative Commons licenses. BHOREAL is Windows/Mac OS/Linux compatible. 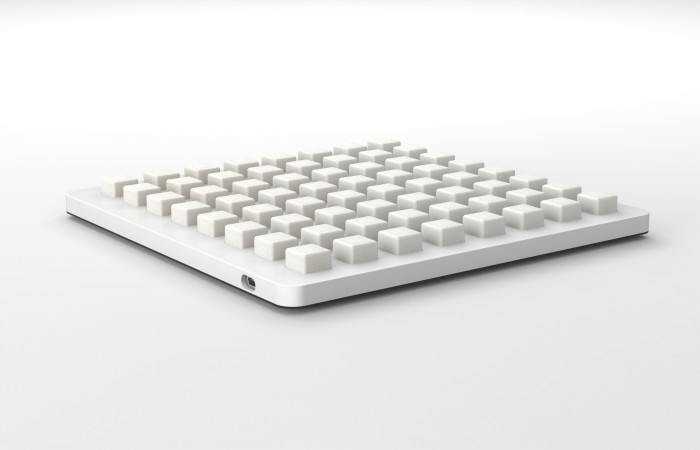 All BHOREAL control interfaces have a minimalist design. Its external appearance is extremely simple, with a square shape and backlit buttons, without icons or marks.

A BHOREAL controller does not generate sounds by itself. It is a blank slate, without any autonomous function. It has to be connected to a computer and associated to a software in order to work. When you connect BHOREAL controller to a computer, begins a startup test program and the buttons blink. Each button has its own LED and... Surprise! They are RGB!

Open Source philosophy is present in both hardware and software design. The firmware is Open Source and all its documentation is released under Creative Commons licenses.

BHOREAL Minikit is a 16 pads controller in DIY kit version. The kit contains all the components you need for assembling your own BHOREAL control interface within minutes, even without prior experience. The kit includes a printed circuit board and a bag containing all the assembling components. It does not include an external enclosure. It has fewer buttons than the other BHOREAL models, but it still has all the features of its bigger brothers within a reduced format. This version has been designed as a low-cost option.

BHOREAL Kit is a 64 pad controller in DIY kit version. The kit contains all the components you need for assembling your own BHOREAL within a limited amount of time, even without prior experience. The kit comes with two printed circuit boards, a bag containing all the components required for assembling and a base+cover for its enclosure. All the BHOREAL potential in a DIY version.

BHOREAL Slim is a “ready-to-use” preassembled 64 pad controller. Lightweight and with an extremely thin design, this model has been designed to be immediately incorporated to any project and enjoy a unique interaction experience. It shares the functional features with the DIY kit, but its electronics have been implemented on a single PCB, with its components highly integrated for a more compact look. It is the ideal choice for creative users willing to get down to work.

BHOREAL Slim PRO is a “ready-to-use” preassembled 64 pad controller. It comes with the same structural features and functionalities than the Slim version but taking a step forward its communication capabilities and energetic autonomy. The Slim PRO version enables communication via OSC (Open Sound Control) through a built-in WiFi module and incorporates a high-capacity lithium battery. Therefore you can use your controller wirelessly in concerts, presentations and performances. The most advanced BHOREAL device for restless minds.

BHOREAL can work through three different communication protocols: Serial, MIDI and OSC (Open Sound Control) and therefore it can be used with many applications.

By using the serial protocol we can connect BHOREAL to any device/software which is serial port compatible.

In case we choose MIDI, we can use BHOREAL with any standard software for music creation/image processing in real time and we can create a wide range of MIDI mapping and paging systems, with different color settings.

Finally, by using OSC (Open Sound Control) we can control software applications which are already available and develop our own programs and apps, sequencers, sampling tools, synthetizers, grooveboxes, drum machines, algorithmic and generative controllers (such as "Game of Life"), maths simulators, game interfaces, low-res LED devices, lighting remotes, home automation and robotics among others, in addition to any other compatible device. 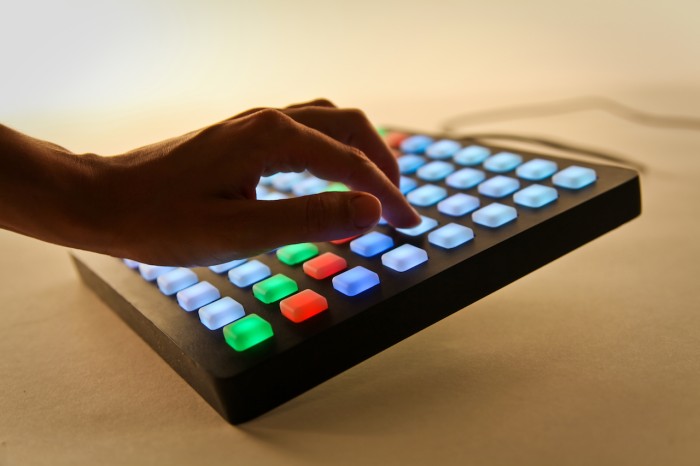 BHOREAL is inspired by Arduinome, the Arduino version of Monome controller, and it is an evolution of Octinct, a review of Arduinome replacing the monochrome LED with RGB LEDs.

Octinct introduced numerous changes in the electronic design and the original Arduinome software, using an Arduino shield and four 16 pads wire-connected controllers. The original design of Octinct and most of these changes were developed by Jonathan Guberman.

Octinct continued to evolve in Hangar Arts Production Centre Interaction Lab, in Barcelona. Shortly after, BHOREAL project was born, being promoted and developed by MID, an interaction design studio especializing in the development of installations and hardware projects.

Over the last years MID has developed several BHOREAL revisions that have allowed to optimize the device with new features and better implementation.

In keeping with our committment to open knowledge, over the past three years we have run several workshops for DIY creative minds about both Octinct and previous versions of Bhoreal in various cities across Spain 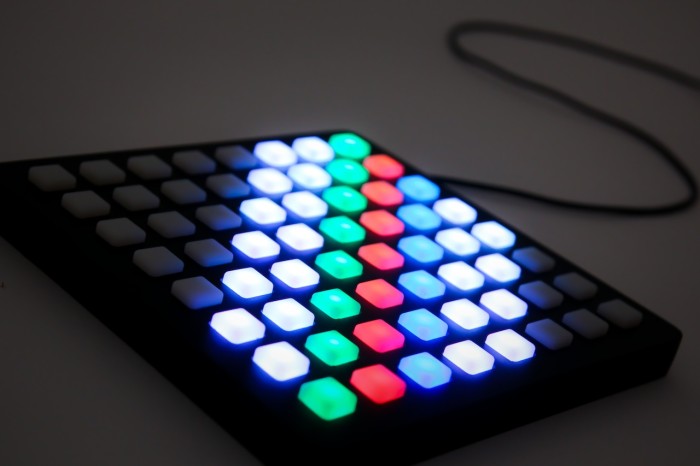 The main objective is to raise the necessary funds to cover the design, production and documentation costs of a new line of Open Source products drawing upon technology and creation fields.

In the short term, we want to develop a reference web platform for you to access contents and useful information related to the project, including schematics, manuals, video tutorials, examples, links, forums, FAQs, etc.

We also want to build a large community around this project and to establish connections with other communities of users who have a similar approach to the understanding and development of open hardware, therefore encouraging the use of open source tools in different areas.

In the medium/long term, we want to set the basis for developing software apps, with the aim of integrating BHOREAL with the largest possible number of existing and emerging platforms and audiovisual environments.

We are open to proposals and collaborations for the development of Apps for tablets and smartphones, both Android and iOS. We would love a SDK for compatible Apps in order to take full advantage of BHOREAL hardware.