Online support to configure your sensors

If you already have similar openhardware sensors, we can assist by mail to configure their access to the platform + Smart Citizen sticker for your computer or sensor + A visit to FabLab + Web Recognition

“QR” T-shirt and a visit to FabLab

Exclusive Smart Citizen T-shirt, with which you can activate the web access network we are creating + A visit to FabLab where you can get to know our instalationes and our work in the field of personal fabrication + Web Recognition

Simple board with 3 sensors: humidity, light and temperature + Online support for adding your kit on the Smart Citizen platform + T-shirt + Web Recognition

Simple board with its box, the 5 sensors configured with your WiFi data (to start work just turn it on) + Online support for adding your kit on the Smart Citizen platform + T-shirt + Web Recognition

Board kit and full sensors + A position at Smart Citizen workshop, to learn how to take advantage of the device + T-shirt + Web Recognition

Designed for educators and schools or civic centers: 5 board kits and full sensors + 5 positions at the Smart Citizen Workshops + 5 T-dhirts + Web Recognition

For businesses, universities and research groups: 10 full kits of board and sensors + A dedicated and design workshop for 10 people + 10 T-shirts + Web Recognition

Become a smart sensor of the city, generating and sharing real data on air and noise pollution, and much more!

What are the real levels of air pollution around your home or business? and what about noise pollution? and humidity?

Now imagine that you could know them, share instantly and compare with other places in your city, in real time ... How could this information help to improve our environment quality?

From Smart Citizen we want to answer to these questions and many more, through the development of low-cost sensors. Now you can be one of these sensors in a network by supporting this project. But we will not stop here ... How can we built a real Smart City...by Smart Citizens?

WHAT IS SMART CITIZEN:

Smart Citizen is a platform to generate participatory processes of people in the cities. Connecting data, people and knowledge, the objective of the platform is to serve as a node for building productive and open indicators, and distributed tools, and thereafter the collective construction of the city for its own inhabitants.

The Smart Citizen project is based on geolocation, Internet and free hardware and software for data collection and sharing, and (in a second phase) the production of objects; it connects people with their environment and their city to create more effective and optimized relationships between resources, technology, communities, services and events in the urban environment. Currently it is being deployed as initial phase in Barcelona city.

WHAT IS A SMART CITIZEN KIT:

The SCK is a electronic board based on Arduino (http://en.wikipedia.org/wiki/Arduino), equipped with the following sensors:

In addition, the board contains a solar charger that allows to connect it to photovoltaic panels to be installed anywhere. The board is equipped with a WiFi antenna that allows you to upload data from the sensors in real time to the online platform which is being developed withing the project and which will be based in Cosm (https://cosm.com/, previous Pachube) .

The Smart Citizen Kit is based on an Arduino shield developed ​​by Fab Lab Barcelona and Hangar. The version that will be funded through this campaign will remain compatible with Arduino, but it will be an autonomous board, which can be programmed from the same development environment (IDE). Improvements will include:

Computers have allowed us to create content, and Internet we can share it with. Now is the time to act in the physical world using both tools. Through the development and distribution of urban sensor kits, we will use devices to upload information from the environment to the web (as when we send messages to social networks, or we post videos or images) and thereby visualize and share values ​​such as air or noise pollution from wherever we want. 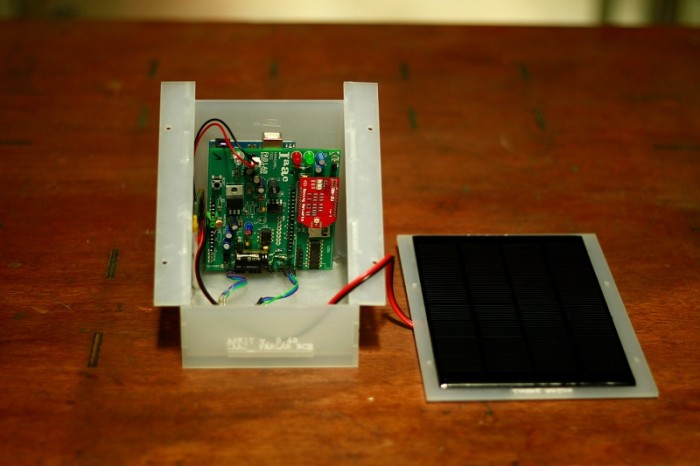 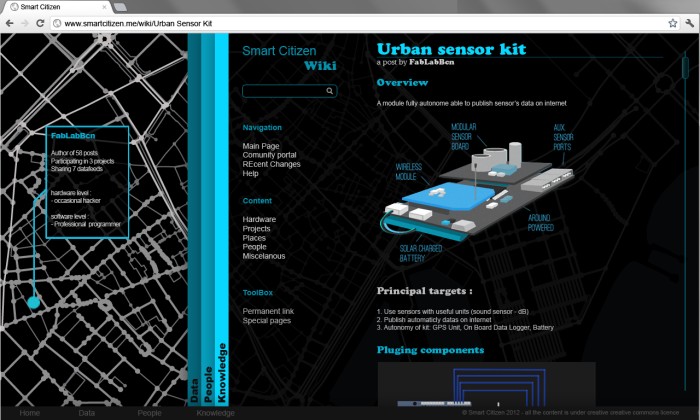 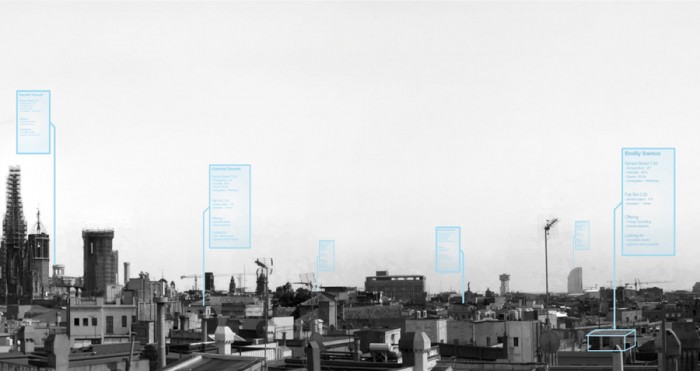 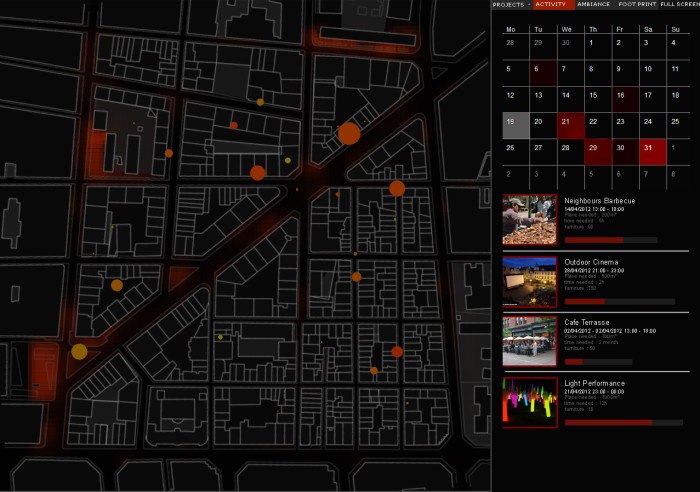 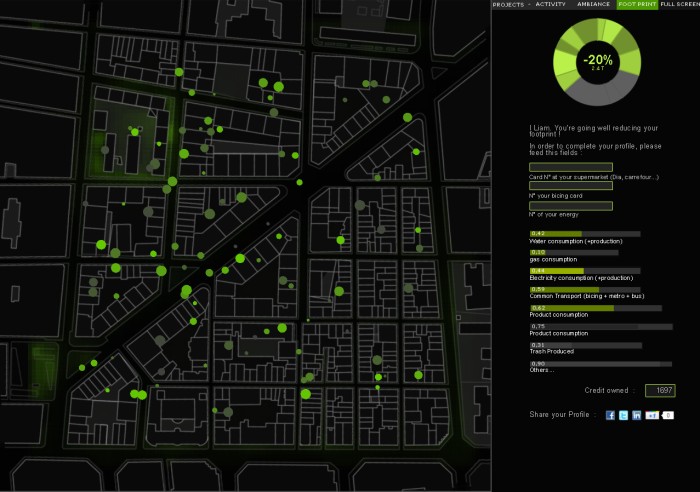 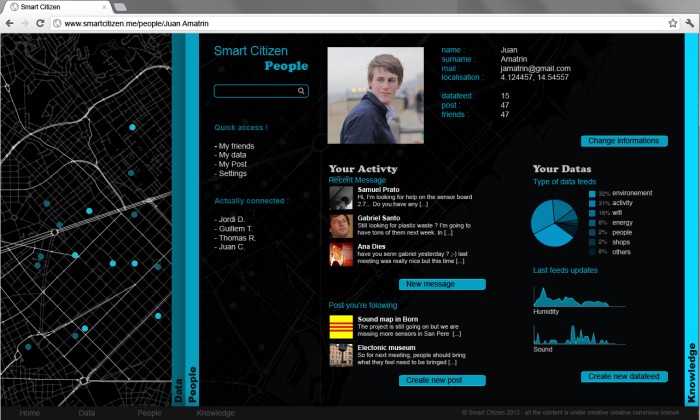 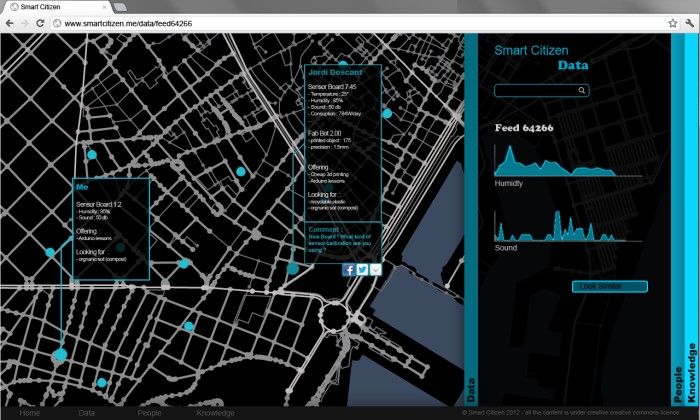 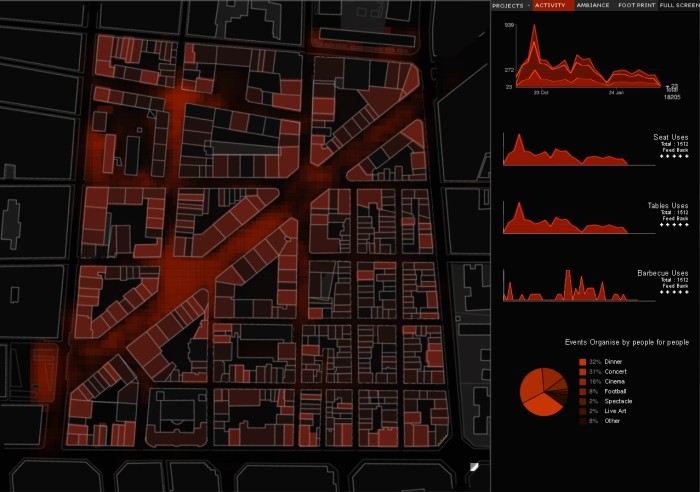 Through this project, we intend to work in:

The project begins with the assumption that intelligent cities (or "Smart Cities", currently under discussion and development around new urban models more efficient and sustainable) must be produced primarily by intelligent citizens ("Smart Citizens").

To do this we need to develop tools that allow us to create, share and distribute things and information that we produce as citizens, and from there contribute to inform about the performance of the city, and enable solutions for all through public institutions, as well as activating our own new solutions to pollution problems, traffic, public spaces, communication, etc..

The project is born within Fab Lab Barcelona (http://fablabbcn.org/) at the Institute for Advanced Architecture of Catalonia (http://www.iaac.net), both focused centers on the impact of new technologies at different scales of human habitat, from the bits to geography. It is developed in collaboration with Hangar (http://www.hangar.org).

The project is aimed to Barcelona active citizenship (in the first phase), and people with interest in the use of open source hardware and software as change generators of the older productive models of management and operating in the city, and to institutions that investigate about it.

Anyone can use these kits and install them at home, on a town square or, the playground of their children, and if you're more "geek" you can use the kit and add advanced features of Internet of Things (Internet of things: http://en.wikipedia.org/wiki/Internet_of_Things).

Smart Citizen will be extended to applications involving distributed 3D printing and manufacturing, and will add options to register resources like MakerBot (http://www.makerbot.com/) or RepRap (http://reprap.org/wiki/RepRa/es) and make them available as a service of manufacturing in the city.

The objective of this campaign is to fund collectively the development of the Smart Citizen Kit: a electronic board in Open Hardware that can capture and share environmental data through Internet. It consists of sensors, battery charger and WiFi antenna, and can be used by any citizen not necessarily experienced in electronics. In addition the board will allow advanced users to add features and capabilities, depending on their needs.

At the same time, we want to fund the launch of the first version of the online platform (based con Cosm) that allows anyone to upload data that has been captured with their kit to Internet, share them with other people through social networks and use them to influence spaces, both domestic and neighborhood scale.

The purpose of the platform is to make this information useful and understandable, which will allow to generate a decentralized database and can be used for: event planning, task automation, management of shared spaces, evaluation of environmental conditions for special users, research, or education.

Finally (and not least), we want to organize a series of workshops and conferences "Smart Citizen", which will disseminate the learning of new tools for citizen participation in Barcelona city.

The workshops will be coordinated from Fab Lab Barcelona, ​​and will be directed to the general public, at the same time developing packages aimed at stakeholders in the project:

Fab Lab Barcelona team has developed Hangar and various projects related to electronics manufacturing and digital fabrication at different scales. Specifically, the promoters of this project are: